1) State and explain the ‘law of demand’ with its exceptions.
Ans:
Law of Demand:- Law of demand is one of the important basic laws of consumption. Dr Alfred Marshall, in his book “Principles of Economics”, has explained the law of demand as follows.
“Other things being constant the higher the price of the commodity, smaller is the quantity demanded arid lower the Mice of the commodity larger is the quantity demanded.”
The law of demand explains a change in the behaviour of consumer demand due to various changes in price. Marshall’s Law of demand describes the functional relation between demand and price. It can be expressed as D = f (P) that is demand is a function of price. The relation between price and demand is inverse because larger quantity is demanded when a price falls and smaller quantity will be demanded when the price rises. The law of demand is explained with the help of the following schedule and diagram.
Demand Schedule 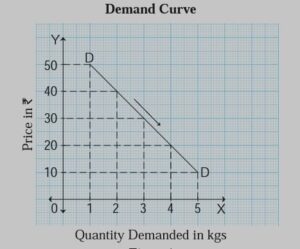 In this diagram, X-axis represents demand for mangoes, whereas Y” axis represents the price of mangoes. DD is demand! a curve which slopes downwards from left to right. In other words, its slope is negative because of an inverse relationship between price and demand. 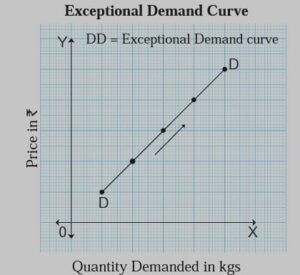 a) Giffen goods:-
Certain inferior goods are-ca1Md Giffen goods, when the price falls, quite often less quantity will be purchased than before because of the negative income effect and people’s increasing preference for a superior commodity with the rise in their real income. Sir Robert Giffen observed the situation related to demand for bread & meat in England. When the price of bread was decreasing, less bread was purchased. Here surplus money was transferred to purchase meat, as a result, demand for meat increased. This behaviour is known as Giffen’s paradox. Thus Giffen goods are inferior goods which have a direct relationship between price and quantity demanded, In this case, the demand curve slopes \ upwards from left to right as shown in the above diagram.

b) Prestige goods:-
Diamonds, high priced motor cars, luxurious bungalows are prestige goods. Such goods have a “snob appeal”. Rich people consume such goods as a status symbol. Therefore, when the price of such goods rises their demand also rises.

c) Price illusions or  Consumers Psychological bias:-
Consumers have an illusion that high priced goods are of a better quality. Therefore the demand for such goods tends to increase with a rise in their price. e.g. Branded products which are expensive are demanded at a high price

e) Ignorance:-
Sometimes people do not have proper market knowledge. They may not be aware of the fall in the price of a commodity and thus they tend to purchase more at a higher price.

f) Speculation:-
When people speculate a change in the price of a commodity in the future, they may not act according to the Law of demand. People may tend to buy, more at rising price, when they anticipate further price rise. For example, in the stock market, people tend to buy more shares at rising prices. Even if prices of some goods like sugar, oil etc. are rising before Diwali, people go on purchasing more of these things at rising prices, because they think that prices of these goods may increase further during Diwali.

g) Habitual Goods:-
Due to a habit of consumption certain goods like tobacco, cigarettes etc are purchased even if prices are rising. Thus it is an exception.

2) Explain in detail the determinants of demand.
In ordinary language, demand means a desire. Desire means an urge to have something. In Economics, demand means a desire which is backed by a willingness and ability to pay.
Definition of Demand:
According to Benham, “the demand for anything at a given price is the amount of it, which will be bought per unit of time at that price.”

c) Prices of Substitute Goods: If a substitute good is available at a lower price then people will demand cheaper substitute good than costly good. For example, if the price of sugar rises then demand jaggery will rise.

d) Price of Complementary Goods: Change in the price of one commodity would also affect the demand for other commodities. For example, car and fuel. If the price of fuel rises, then demand for cars will fall.

e) Nature of product: If a commodity is a necessity and its use is unavoidable, then its demand will continue to be the same irrespective of the corresponding price. For example, medicine to control blood pressure.

h) Advertisement: Advertisement, sales promotion scheme, and effective sales-manship tend to change the preferences of the consumers and lead to demand for many products. For example, cosmetics, toothbrush, etc.