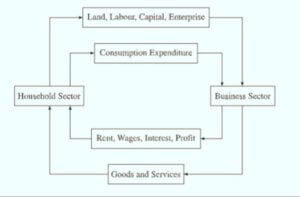 2. Explain the importance of national income.
Answer: – The following points explain the importance of the National Income:
Useful for the Economy: National income data are important for the economy of a country. In present times, the national income data are regarded as accounts of the economy, which are known as ‘Social Accounts’. It tells us how the aggregates of a nation’s income, output, and product result from the income of different individuals, products of industries, and transactions of international trade.
National policies: National income data forms the basis of national policies such as employment policy, industrial policy, agricultural policy, etc. National Income also helps to generate economic models like growth models, investment models, etc. Thus, proper measures can be adopted to bring the economy to the right path.
Economic planning: For economic planning, data pertaining to national income is very essential. This includes data related to a country’s gross income, output, savings, investment, and consumption which can be obtained from different sources.
Economic Research: National income data are also used by the research scholars of economics. They make use of various data of the country’s input, output, income, savings, consumption, investment employment, etc., which are obtained from social accounts.
Comparison of Standard of Living: National income data helps us to compare the standards of living of people in different countries and of people living in the same country at different times.
Distribution of Income: National income statistics enable us to know about the distribution of income in the country from the data related to wages, rent, interest, and profits. We understand the disparities in the incomes of different sections of society.

4. Explain the concept of Green GNP.
Answer: – Concept of Green GNP: It is defined as, “Green GNP is an indicator of sustainable use of the natural environment and equitable distribution of benefits of development.”
Gross National product does not take into consideration the cost in terms of (i) Environmental pollution, (ii) Depletion of natural resources caused by the production of output. A mere increase in GNP will not reflect an improvement in the quality of life when it increases environmental pollution or reduces available resources for future generations. So Green GNP has been introduced while measuring economic welfare.
The following are the characteristics of Green GNP:
a. Sustainable economic development, i.e. development which should not cause environmental degradation (pollution) and depletion of natural resources.
b. Equitable distribution of benefits of its development.
c. Promotes economic welfare for a long period of time.
Measurement: Green GNP = GNP – (Net fall in the stock of natural capital + pollution load.)