1) Explain the law of supply and its exceptions.
Answer: – The law of supply is also a fundamental principle of economic theory like the law of demand. It was introduced by Prof. Alfred Marshall in his book, ‘Principles of Economics’ which was published in 1890. The law explains the functional relationship between price and quantity supplied.

Law of supply is explained with the help of the following schedule and diagram:

In the above table explains the direct relationship between price and quantity of commodity supplied.
When price rises from ₹ 10 to 20, 30, 40 and 50, the supply also rises from 100 to 200, 300, 400 and 500 units respectively.
Thus, there is a direct relationship between price and quantity supplied which is shown in following figure: 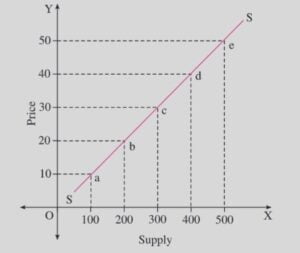 Exceptions to the Law of Supply:

Following are the exceptions to the law of supply: 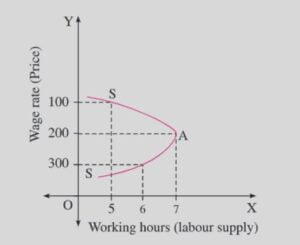 In the above figure, the supply of labour (hours of work) is shown on X-axis and wage rate per hour is shown on the Y-axis. The curve SAS represents the backward bending supply curve of labour. Initially, when the wage rate is ₹ 100 per hour, the hours of work are 5. The total amount of wages received is ₹ 500. When the wage rate rises from ₹ 100 to ₹ 200, hours of work will also rise from 5 hours to 7 hours and the total amount of wages would also rise from ₹ 500 to ₹ 1400. At this point, labourers enjoy the highest amount i.e. ₹ 1400 and work for 7 hours. If the wage rate rises further from ₹ 200 to ₹ 300, the total amount of wages may rise, but the labourer will prefer leisure time and denies working for extra hours. Thus, he is ready to work only for 6 hours. At point A, the supply curve bends backward, which becomes an exception to the law of supply.

2) Agricultural goods: The law of supply does not apply to agricultural goods as they are produced in a specific season and their production depends on weather conditions. Due to unfavourable changes in weather, if the agricultural production is low, their supply cannot be increased even at a higher price.

3) Urgent need for cash: If the seller is in urgent need for hard cash, he may sell his product at which may even be below the market price.

4) Perishable goods: In case of perishable goods, the supplier would offer to sell more quantities at lower prices to avoid losses. For example, vegetables, eggs etc.

5) Rare goods: The supply of rare goods can not be increased or decreased according to its demand. Even if the price rises, supply remains unchanged. For example, rare paintings, old coins, antique goods etc.